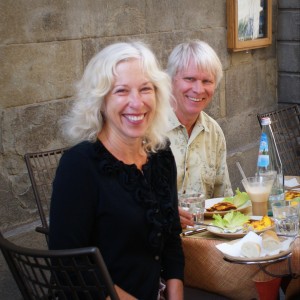 Free to Be My True Self

It all started at a fundraiser for a local non-profit. It was time to bid on a one-week vacation in Cortona, Italy. Our friends, William and Deborah, attended the event determined to win the trip to Italy; and as the bidding escalated, William turned to my husband, Jim, and uttered those forever famous words, “Are you in?” Jim looked wide-eyed at William and exclaimed “YES!” And, so our journey began.

We were five days into our Cortona trip when the four of us decided to walk around the perimeter of the town to see Bramasole, the house featured in Frances Mayes’ popular movie and novel, Under the Tuscan Sun. As we re-entered the city’s walls, we found ourselves at the entrance to the Church of Santa Margherita. We’d been wanting to see the mummified body of Santa Margherita, so we went in.

After entering the church, the lights in the church started to shut off. Then, when Jim and I got to Santa Margherita’s glass coffin on the altar, the light inside her coffin went off too. We headed toward the main part of the church and more lights went off. I looked for our friends and noticed they were no longer sitting in their pew. They weren’t anywhere in the church. What was going on?

A fully-garbed Franciscan nun caught my eye and beckoned me to the front of the church, where people were now sitting in the front pews. I thought the nun wanted me to attend Mass. There was no way this fallen Catholic was going to Mass! I ignored the nun, grabbed Jim, and scurried to the front door of the church. It was time to get out of there.

As we approached the alcove to the front door, the alcove became very dark – so dark I couldn’t see my hand in front of my face. I could feel a huge piece of heavy wood bolted across the door, thwarting all our efforts to exit the church. We were trapped.

As the darkness closed in around me, I started to panic. I didn’t want the nun to hear me, so I freaked out as quietly as possible, only to feel even more panicked. We then heard a knock on the door from outside. Our friends were shouting, “Are you in there?” I could hear them laughing on the other side of the door as my panic sent me backing up into the corner of the alcove. I felt like I was in prison and going to die if I did not get out of there. I knew that my life was ending. When my body touched the corner wall, I found myself melting into the floor like the Wicked Witch of the West when Dorothy from the Wizard of Oz threw water on her.

I felt stunned when I found myself crouched in the corner of the alcove. Jim was still trying to unlock the door. I knew we had to find another way out, so I gathered my courage and walked to the entrance of the alcove to peer out from my blackened cage. There was the nun, standing directly in front of me! She motioned for us to follow her, and this time I understood she wanted to lead us out of the church. We followed the nun down a very long hallway with offices and chapels off to the side. Jim thought they were cool and wanted to linger, but I needed to get out of there – FAST!

We turned a corner, stepped through a doorway, and out into the light. As we walked outside our friends came around the corner. When we saw each other we burst into uncontrollable laughter. It turns out our friends bolted from their pew as soon as they saw the nun walking towards the door with her keys jingling. When they got outside, the door shut and they heard a CLICK as the nun locked the door behind them. It felt like an episode straight from I Love Lucy. To this day we can’t help but laugh whenever the episode is mentioned.

But why was I so freaked out about getting locked in a Catholic Church? William, who has his own nun issues, understood why the incident would freak me out, but I needed to investigate further. I made a note to myself to journal about the experience when I got home. This is what I wrote:

“The episode brought back feelings of being in Catholic school – it was like being in prison. I wanted out of that prison since I was in the first grade. I thought Sister Rosalie Terese was so WRONG when she wouldn’t take the dime my dad had given me for the UNICEF drive at school just because I was two minutes late for school that morning. She was going to deny those poor children food and clothing because I was two minutes late for school. How absurd!

“I knew then I needed to get out of there to save myself. That day, I ran home at noon and told my mom I was not going back to that school. She called my dad and he came home on his lunch break. They talked with Sister Rosalie Terese without me, and then they made me go back to school after lunch that day. I was so disappointed my parents sent me back. How could they kill my spirit? I know they didn’t realize the ramifications of their actions, but on that day I realized I could no longer be aligned with my Soul/Spirit/Source. The episode with Sister Rosalie Terese was added to other dark episodes in my young life that were buried deep in my subconscious; so before I was seven, I learned that my true Self had to be hidden behind a big black door. Oh My Goodness! Big Black Door… just like the door at the Church of Santa Margherita!”

As I wrote about the Big Black Door, I felt a WOOSH come out of my body, and I saw my family room fill with a fog-like substance. I suddenly felt so incredibly HUGE and POWERFUL and HAPPY. I took a few moments to savor the feeling. I had never felt anything like it before – my presence took up the entire room. Then, suddenly, I realized I couldn’t stay that big – people in my life would be afraid when they saw how big and powerful I was. My presence overwhelmed me and I knew people would not like the new me. So I did what I knew how to do best: I tucked myself back inside. I did not stay with myself.

Sometimes I wonder what my life would have been like if I hadn’t been sent back to St. Vincent’s in the Fall of 1956. Perhaps I would have felt empowered and known I could embrace my true Self. Perhaps there would be no more secrets and no more shame. Perhaps I would not have lived my life in fear for 50+ years. But no matter what might have been, this is where I am now. It’s time to move forward. No more hiding.

PS: Recently, while preparing to downsize our home, I came across my Confirmation certificate. Can you guess which saint I chose to be my Spiritual Guide in 1964? Of course, Santa Margherita. Blessed Be!