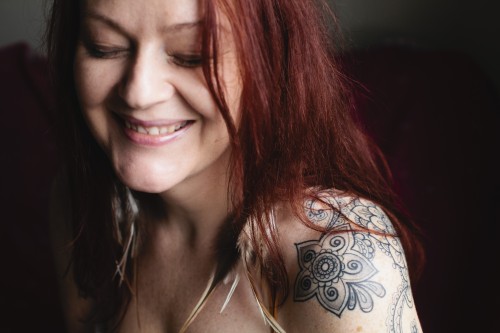 The very first time I discovered something I shouldn’t, I learned about a part of myself I didn’t like: the anxious, compromising, needy me. I was angry and hurt but also questioning myself: why wasn’t I enough? I had found photos of girls, chat room conversations. I couldn’t breathe. I confronted him. He tried to make light of it, but then became embarrassed, sorry, pleading. What I didn’t want to face was that he had shown me his character; I was fighting to believe he was not that guy. And in the wake of his guilt, he did his best to prove to me that he was still the man I had married. But it felt contrived and awkward between us. Little arguments became big fights, and always with me bringing up what he had done. It was as though he had chipped the glass and the pressure was causing the cracks to spread.

Nothing shattered, until months later. After the initial attempts to appease his guilt, he had become distant, moody, cold. Then defensive and accusatory. I tried to be patient, to forgive, to give him the space he seemed to need. What I didn’t know is that by then he had met the CSI (Canadian Stick Insect).

We went away for Christmas with old friends. Four days in the snowy English countryside in an idyllic cottage. He was back to his old self in company. Alone, we barely spoke. The drive home was completely silent. I remember the moon was low in the sky the whole way, enormous and purple. Breathtaking. I ran myself a bath when we got home and grateful for escape time, settled in to finish Pullman’s Amber Spyglass. Later, when I found his note, I had to read it several times. Didn’t think he loved me anymore. Needed space. Give me a few days. Sorry. I opened his wardrobe, knowing it would be empty. He did not come clean about the CSI (Canadian Stick Insect) until weeks later, and only after I had hacked his hotmail account and found evidence to confirm my suspicions.

Worse in many ways than the initial shock, is the unavoidable and insidious thought that you didn’t do enough. You think of everything you managed to not see; all the clues left, hints dropped. You beat the shit out of yourself for letting it happen, as if it was your burden, your obligation, under your control. You question everything, all of your choices, actions, your ability to discern a person’s character. Because you are losing (have already lost) the person who promised to love you forever. In front of god and everything. The person who knows all those things, that you don’t want to have to wait for someone else to learn. That person has simply replaced you. You are replaceable.

It took me months, maybe years to really forgive myself. To let go of assuming responsibility for his actions. He was deceitful, hurtful, disrespectful; all the steps leading to the physical infidelity mattered more in the end. He was duplicitous and cowardly.

I guess on the surface, I put myself back together in a matter of months. I had to keep moving forward, even taking baby steps; to act for myself. It took much longer to rebuild my confidence enough to make the braver choices; to take new risks with my heart, to travel alone, to go for the big job, to come home. I look back at the person I was, and I barely recognize her. I have grown so much that I now feel a very real and deep sense of gratitude for the whole experience: it set me free.

It has only been very recently that I have been able to answer the one question that has swirled around me since the night I finished the Amber Spyglass: how can I protect myself from being hurt like that ever again? The conclusion I have reached is that the only way to be certain of never being hurt, is to never let anyone get too close. And I know that for me, such a fate is worse than any broken heart.

{Sas Petherick is a Certified Coach and writer who coaches women to get clarity, uncover their awesome, unblock resisty thoughts, shift perspective and allow their dreams to unfold. She’s been described as ‘equal parts laughing buddha and fiery femme, salty sailor and foxy minx’. Find out how to amplify your life with curiosity and kindness Here.}