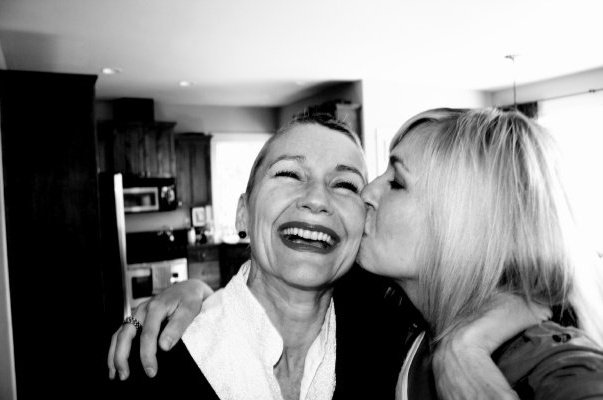 Permission to Embrace Myself

Perhaps it was the very fact of her otherness that drew me to her. The way she lit up a stage and the comfort she felt commanding the attention of an entire auditorium. Not in a fake, puffed up way – but like she truly belonged there, like she couldn’t be any other way and wouldn’t really be acting on her inborn nature were she not in the spotlight. She, so very different from my shy, wallflower self that in the end it took me by surprise how much this vastly other creature and I shared in common. How she helped me find and articulate the words of my own experience, how by being who she was I was given permission to embrace myself. And how being a part of her life in her dying days helped me find the courage and strength to fully live.

I knew who Lorelei was long before we met, for she was a “public” figure. She was one of the worship leaders, along with her husband Ron, at the church I attended. A few memories stand out to me in those early days before she became part of my life: watching her fingers dance across the keyboard of a piano, and her theory on extraterrestrial life; the latter of which came as quite a shock during part of an otherwise traditional, evangelical Christian church service. “Did she really just say she believes in aliens?” I remember thinking to myself – immediately followed by “Interesting! I like her!” And here I must mention the physicality of Lorelei and her signature style, because it’s so important in explaining who she was. Tall, slender, with a shock of thick black curly hair – initially long – later shorter. Piercing green eyes, angular jaw line, painted red lips. She favored classic black, mixing it up with punches of color here and there – jewelry and scarves. And her laugh! Her laugh was something to remember because it bubbled up and out of her with such force of joy that one couldn’t help but laugh along with her in hopes of catching some of the delight.

She and I became friends when along with my husband I joined a church planting team that she and her husband were launching in Portland Oregon. At first I felt shy and intimidated in her presence. I wanted to impress her but feared I was just too quiet and boring for someone of her magnitude. Slowly I began to realize that I was at ease around her, that in fact she had a way of making me feel comfortable – that I had nothing to hide or prove. I was surprised by this discovery. After all, what could I possibly possess that would be of import or interest to someone like Lorelei who could spin a tale, create music, and make people effortlessly fall in love with her?

It was in March of 2009 that Lorelei was diagnosed with stage-four brain cancer. I remember endlessly Googling her prognosis and coming back to the same answers over and over again. It seemed her time on earth was very limited. I was shocked, angry, heartsick, devastated. It was incomprehensible that she of all people could be afflicted with such a monstrous thing. During the ensuing months I had the chance to spend several precious days with my friend. I watched as she lost her hair and so much weight it was hard to hide my shock each week as she grew increasingly frail. True to Lorelei’s feisty character she fought her cancer authentically. One moment she would be passionately making plans for the future, and the next she would be devastated with her latest physical realities. We would often take walks together in the hills of her neighborhood. One such morning walk stands out clearly in my mind. Her face was turned toward me, engaged in conversation – we were at the top of a ridge and it started to rain. In that moment it struck me: She is dying, and I am with her, right here, right now. And I felt so grateful. She was giving me a gift. The gift of herself, her time, her full presence, and most amazingly the gift of her dying days. I can say with certainty – it’s one of the most extraordinarily beautiful gifts I’ve ever been given.