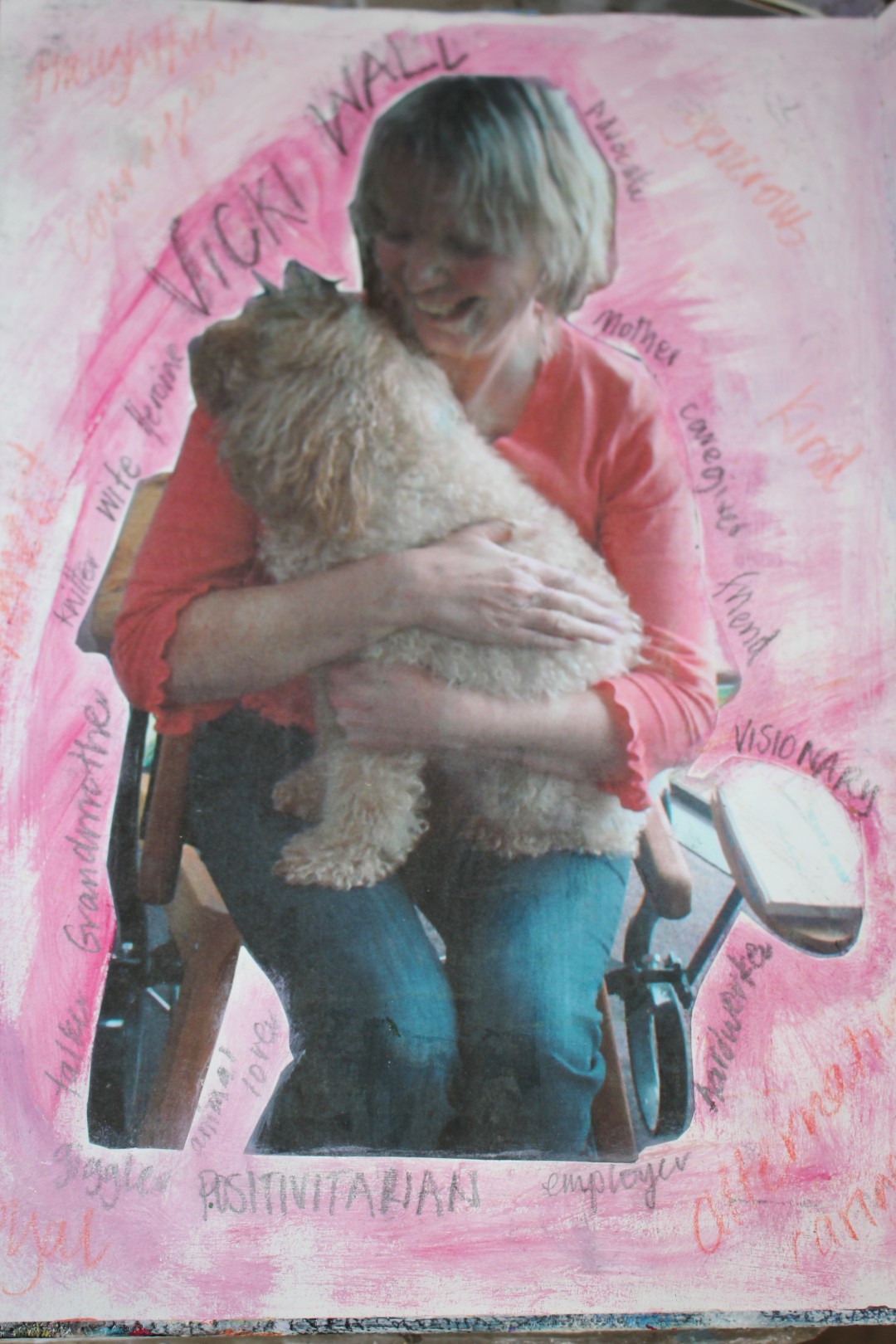 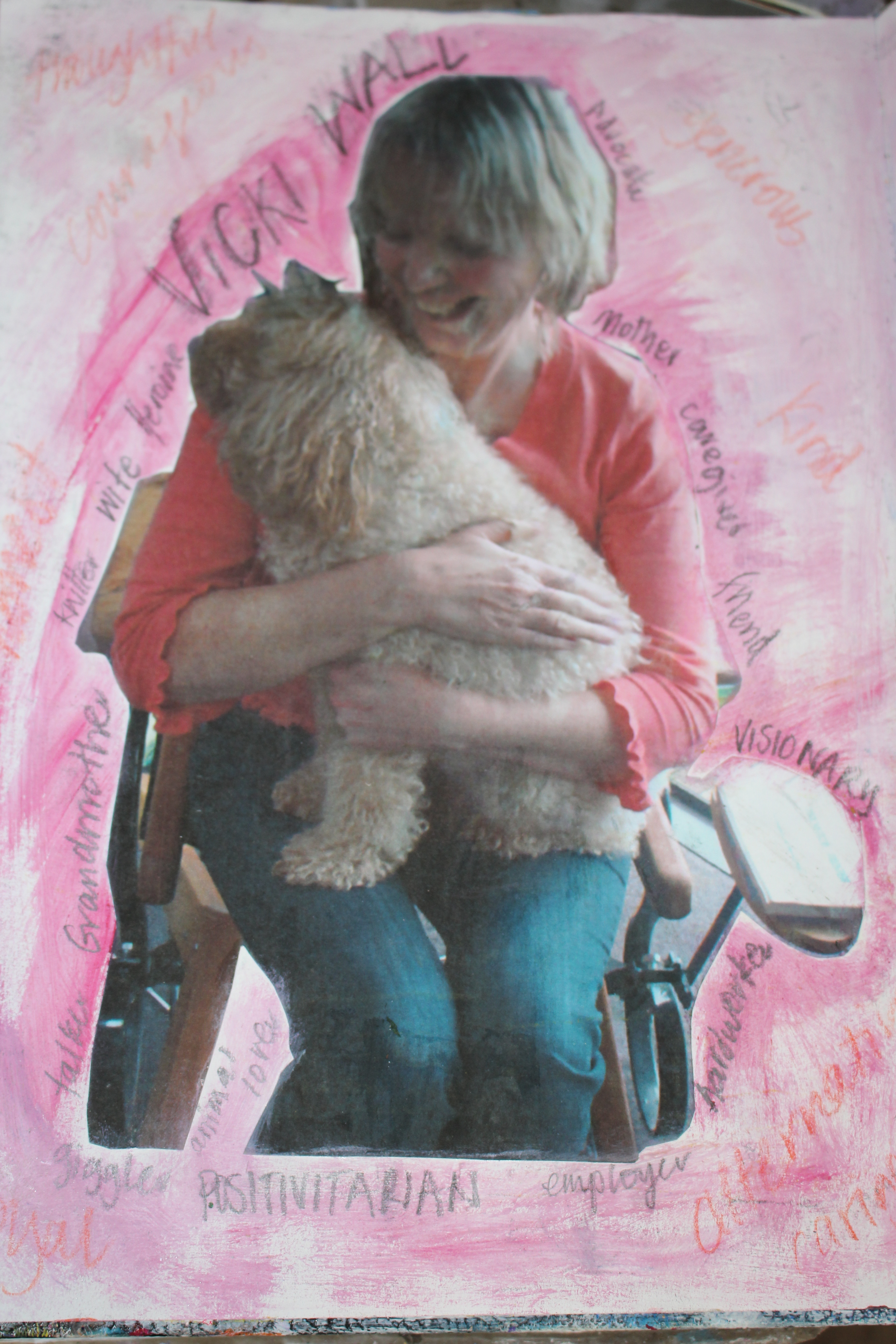 She Would Never Judge

My first memory of Vicky is at a job interview.  We were amongst a number of applicants for the role of staff nurse at an institution for people with intellectual and physical disabilities. It really was a bin for discarded people. An unkind place. I really wanted the job and, so it seemed, did Vicky.

Skinny, blonde, like a bird with quick movements and a chittery voice that bubbled and rushed out of her, filling up the air, she talked and giggled and talked. About her work experience, why she wanted the job, how good it would be to work there, her family, her beliefs around the people who lived there.

Introverted me was bowled over – this wall of words, ideas and enthusiasm could not possibly keep going.  But it did.  It has.

I have known her for over 20 years and it never stops. Every day Vicky gets up, cell deep in the knowledge that she can make the world a better place. And then she just does it.

Through skill, kindness and that impenetrable wall of enthusiastic vigour, Vicky has raised 4 beautiful children, tended a loving marriage, made choices around birth (she is a home-birther), education (Steiner schools), medical care (Anthroposophical Medicine) and the lives of everyone she comes in contact with are richer if not a little shaken up by her presence.

When she lives her life the way she does, with the station finely tuned and the volume knob way up, it gives you pause to question. What am I rooted in? What kind of fruit does my life produce? You think about how you step up, how you contribute. Because Vicky contributes.

Since she got that job (we were both hired), we supported each other to drive changes in the service we worked in. It wasn’t easy but we made a difference. I left as the institution was preparing to close, burnt out, my tender heart battered and bruised. Vicky, enthusiasm and purpose forging her path, has gone on to support people with disabilities to thrive in remarkable ways.

She has opened four residential homes for people with disabilities, battling community ignorance, poor funding and the damage the system wreaks in the process. She has got her Masters in Nursing, a fellowship to raise issues around sexual abuse and people with disabilities and advocated for individuals who otherwise, would have died without her intervention. When one young man had nowhere to go and no service could manage him, Vicky moved him into her spare room. He has been part of the family for years now. I am honoured to say that when the going gets tough she asks herself “What would Jane do?” To know I can support her in this way is a gift to me.

Vicky has received acknowledgment and love for her contribution – people see what she has done in the lives of the people she works with, family members, support workers. They see the love she pours in to all she does on a one to one level and on a wider political level. Although it is impossible to return all she has given, Vicky did receive a QSM (Queen’s Service Medal – only 60 per year are given for exceptional service to the community and is considered a great honour).

She also received something else: Cancer.

This woman who ate healthy food before it was mainstream, breastfed 4 babies until they were ready to wean, expressed breast-milk at work at a time when that was unheard of got breast cancer.

True to form she did all her own research and had to walk a long path to find medical folk who would support her but her regime has supported her to outlive most of the women in the group of women who developed cancer at the same time as she did. Radical endeavours such as injecting daily doses of mistletoe have seen Vicky not only survive secondaries for over 10 years, but thrive, working full time and blooming as a woman, mother, grandmother and friend.

Vicky’s vigour must have been taken on by her cancer cells because they have begun to be stronger than her will to do more. She is pissed off because she has much more to do but as I write this she has been referred to Hospice, who can’t believe she is alive given all the protocol dodging and extreme procedures she has undertaken, let alone coping as well as she is.

She has disabilities with movement and breathing because of the secondaries and yet when describing the help she needs she writes me stuff like “So lucky me, my life is good”.

She is facing the end soon. One more little shake as she goes. Testing the roots of those who love and will miss her.

Death is so unknown for us all but is seems to me, just another interesting pathway for Vicky to approach with her boundless enthusiasm and vigour. If she asks herself at this stage WWJD? I hope she can see her way to celebrating not just all she has done and accomplished but all she is:  Funny, loving, trusting, gutsy, creative, kind beyond measure and such a gift.

Sometimes my life feels small in the face of all she has achieved. The roads I have taken have not been monumental in the same way but with her oceanic heart and generous vision she would never judge me in this meagre way. She loves like a laser beam, clear and direct. With her love on me I become more proud of myself.

Vicky has so much to do, including going to her son’s wedding in February. How she will manage it I don’t know – mere trifles like doctors saying it isn’t possible haven’t stopped her before now. If anyone can make it that far past the predictions she has been given, it is this skinny little bird of a woman who has changed the world.

{Jane Cunningham is an attendant to the Numinous, Creativity activist and Conduit for Love.  She works as a mother, teacher, artist, storyteller in Whangarei, a beautiful town on the East coast of New Zealand. Find her Here.}